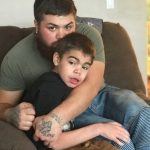 Tell others the story of Gage
Write to guestbook
My goal is to raise $1,000
Total: $0

Gage is the youngest of 2 brothers and a sister. He was very hyper full of energy never stopping, eating constantly. Always laughing. But never was a very big talker. He would mimic but had the sweetest voice I’ve ever heard. He has always ate things that were not food. Come to find out he had pika disorder. Soon after that I put him in pre-school to try and burn off some energy. During that time I took him to the university and they determined he was autistic. But still not making sense why he was still declining! As often as I was taking him to the doctors for quite a few issues. The doctor said I’m going to send you to genetics and we’re going to see what’s going on. At first they thought he had hunters disease that test came back negative then we had to send me and his father‘s blood have to be tested but the insurance group health would not approve it because it is a very expensive test so in the meantime Gage was still declining but still very happy. His doctor kept pushing for the test and they would deny it. This went on for a good 6 to 7 years finally 2017 we got the test back and they said that he had type A of Sanfilippo disease I had no clue what it was. I wasn’t told what it was either because I was told over the phone like it was a great thing . But then when I got off the phone started doing research it was the worst thing I’ve ever heard. We we are all heartbroken . Pretty soon it turned in to the kid that could run walk talk eat to not being able to walk and on a feeding tube. but still happy he is that one kid that he could either make you laugh and cry at the same time. Completely innocent and very loved. So now we are just waiting for a research study to hopefully get some answers and to hopefully try to save him.

There aren't any donations yet.